Whether you have been hoping for it, or hoping against it, George Washington has arrived at Jersey Pie. He has arrived in an odd way: running away from Cornwallis along the part of the palisades that is now Englewood Cliffs. Historians will tell you he was running away as a stroke of strategic genius. However, Jersey Pie happens to know that in 1808, a historian of particular interest, Parson Mason L. Weems could tell a lie. To add interest to a boring childhood he invented a story of young George Washington confessing to his father that he had cut down a cherry tree, rather than tell a lie.

Ah, cherry pie. Now we eat cherry pies to celebrate Washington's birthday, and to honor his honesty. To honor the particular slice of history we recall with our visit to Englewood Cliffs, we also have the George Washington Bridge connecting our palisades to upper Manhattan. Lo, these many years ago, a simple farmer ran with all his might, over the tops of the palisades, on a moonlit night, to tell our George, "Cornwallis is near," (so that he might run away in fear.) Well, it turns out that farmer had a cherry orchard he wanted to protect, AND that his name was WEEMS! (Lie.)

We decided to write our own history and ride along the tops of the Palisades north of the George Washington Bridge to watch the moon rise over the Hudson from the Greenbrook Sanctuary. It was on our way home, (actually it was on our way there, but it sounds better this way) that we spied a sign: Royal Cliffs DINE RESTAURANT. More inspiration.

Close inspection of the sign revealed that there had once been an "R" at the end of DINE. Could the "R" have fallen off? On both sides of the sign??? Maybe when the Englewood Cliffs part of Sylvan Avenue won the nickname "Trillion Dollar Mile" somebody thought they had better class up the joint? Is that when they found the audacity to charge $3.75 for pie? CNBC, Lipton, and Unilever are just a few of the mega-rich, well manicured corporations headquartered on Sylvan. As a result of its mega-wealthy residents, Englewood Cliffs enjoys prestigious Bergen County's lowest (lies are honest, fleeing is bridge-worthy) property taxes! Well, bully for them! Is Sylvan Avenue a "trillion dollar mile?" Or just a road through the trees above the Hudson?

Now you've got us fired up, Englewood Cliffs. And your Royal Cliffs DINE(R) RESTAURANT is going to pay. Because - NO, THEY DID NOT! Well, yes, they did. They committed the most shameful, egregious pie sin in the long history (it's short, but long sounds better) of Jersey Pie. What could be so bad, you ask? What could be so bad?

The Royal Cliffs pie case was right there for Jersey Pie to see. Right there before our moon dazzled eyes was the holy grail of our search: a whole pie. But wait, what have they done? No, it cannot be. Yes, they have cut into that pie, and lifted out the first piece onto a plate. They have exposed one, two, Three, FOUR! edges of virgin pie to the evils of refrigeration. Oh, unnecessarily cutting a virgin pie is bad, you say, but surely they will not serve that piece of pie?! Yes. They did.

Truth. What is it? We all think we know - or guess we know. Parson Weems may have been a mystic seer warning us of our future: terrible things will be done to the truth in the guise of American goodness. Look what's been done to cherry pie for appearance sake. We guess that there are degrees of truth. You can display cherry pie on a plate in the fridge, and it may appear wonderful, but when it comes to the best cherry pie, we think freshness is essential. As soon as a pie comes out of the oven it begins to fade. To the degree that its original qualities are unimpaired it is considered fresh. Refrigeration slows the process and creates refrigerated cherry pie. Another thing entirely. Warming is supposed to refresh it.

The truth is we have to find ways to re-fresh the truth, because it's decaying all around us. We have to make adjustments. At the time of ordering, just in case this nasty slice should be forthcoming from the case, we cleverly changed our order from one slice to two, with coffee, of course. We do admit to having nearly finished that second piece of pie. There were aspects of it that whispered to us of its faded goodness. But what we wanted was that first slice of cherry pie, not the refrigerated one, the fresh one, the one they teased us with. It's out there ... good cherry pie. Don't stop believing. 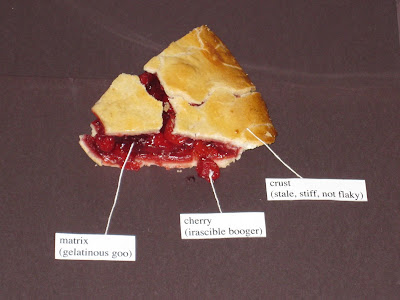 (We brought home that illustrative first piece to share it with you, for the edifying value it may possess in the absence of its ability to please the senses.)
at 5:17 AM

It looks deceptively pleasing in the photo. Alas! But I certainly won't stop believing...tee hee!

(The "word verification" nonsense word I have to type in order to post this is "clupeepa." That word gives me the giggles).

It looks pleasing???? No, the crust looks like cardboard. Have jerseypie email you the picture of a pleasing crust (if I must say so myself). I read the outrage in Jerseypie's last entry. Where, or where, is the pie of which you dream?

I do like "clupeepa." I want to use it in sentences. My word is "nonain." "He passed himself off as something special, but everybody knew he was a nonain."

Well, I only just got a brief clupeepa at the picture. It's not the worst specimen of pie I've ever seen. Not the best, but not the worst, sad to say!

The real issue, Kate Forster, is that you've bragged about your crust one too many times. I think you're going to have to fly your clupeepa out here and put your money where your pie-hole is, missy! ;-)

Bring it on! Did we hear a rumor that there might be a July visit?

Oh - it's on! Kate Forster got served!

(And I hope to get served...served some pie a la Kate).

Yikes! One is reminded that "pride goeth before the fall." One can't make pie crust with hot, sweaty palms. One can't control the salt content if sweat is dripping from the forehead into the dough. It takes a cool head and a keen eye to succeed. I have, on occasion, failed. I'm frightened. The real purpose of the brags was to lure Jerseypie to the other coast. But July, yes, a real possibility. I just hope I don't make a "rotanach."

If at first you make a rotanach, try, try again! We will gobble up all the rotanaches on your way to success.

I'm going to start oiling my bullwhip so I can stand there in July, cracking it while Kate Forster makes her pie crust. No pressure. ;-)

Okay, if we don't force Forster to bake for us, may we at least plan a July Jersey Pie adventure with our visitors in tow?

All I can say is sanoasp.

Adjustments at the time of order why customers have to adjust to the restaurant!!!
Carol
Wireless Home Alarm Security Systems