For those of you just joining us here at Jersey Pie, we offer a quick review of our efforts thus far. After sampling the mediocre cherry pie offered by our local diner we decided to begin a search - chronicled in a blog - for the best cherry pie and coffee in New Jersey. Little did we know we had entered a nightmare world of refrigerator burn, coagulated goo, irascible boogers, high fructose corn syrup, and widget pies. Along the way we did get some pretty good cherry pie at the Bendix Diner (where the crust is too dense), some darn good cherry pie at the Tom Sawyer Diner (where the crust is not quite flaky), and what we think was probably very good cherry pie at the Jubilee Park Diner (where a mop bucket of bleach water overpowered our taste buds.) Six months later, we're still looking for New Jersey's best piece of cherry pie. Which brings us to the self-proclaimed #1 diner in the state.

Jersey Pie experienced a vision in the parking lot of the Nutley Diner, but it wasn't a vision of pie. It looked more like a Belgian waffle with strawberries and whipped cream. Now a lunch of waffles with cherry pie for dessert is not at all sensible, we know; we struggled with the order, but the power of this vision overwhelmed the wisdom of having an omelet, so it was done. In addition we ordered a Swiss, lettuce and tomato on whole wheat toast and an order of waffle fries. Our waitress returned a few minutes after we placed our order to make sure we wanted whipped cream on the waffle. She understood the meaning of our "Yes" with psychic astuteness, for our waffle was served in a veritable helmet of whipped cream. (She knew she was good, and proclaimed it outright, in so many words.) The strawberries were abundant and absolutely fresh, and the waffle was light on the inside and toasty on the outside. If this were a waffle quest, this would be the final, triumphant post of Jersey Waffle. Our other orders were just as fresh and flavorful. The CLT sandwich and fries, for all their simplicity, could not have been better, and, yes, even the ubiquitous slaw was delicious.

So we were encouraged as we sat waiting for our pie and coffee. Maybe the #1 diner in the state was going to knock this one out of the park. But there at the Nutley Diner we were faced with yet another insipid, jejune piece of...pie. A slice so pale, so wan it seemed to have been barely sustained by--weeks?--of refrigeration. And even the coffee had plenty of room for improvement. We ask you, Nutley Diner, "Why, oh why, do you not rotate the pie?" We had so much hope for you, Nutley Diner. Why disappoint us with your inferior pie and coffee?

The pie, the pie, the pie... It seems the odds are stacked against us; at a rate of only three so-so or better slices of cherry pie in twice as many months of searching, is there more going on here than our clever use of the semi-colon? Is this Jersey pie a pie in the sky? Those of you who have been journeying along with us probably aren't even expecting good pie. Isn't that sad? Call us ingenuous ; ) We did believe that this blog would be spent comparing the finer distinctions of a mighty fine dessert. We really did. Since then we've come to know the harsh reality of commercial dining, even of the supposed home-style variety. A reality harsh enough to leave us wondering if our whole endeavor was futile. We felt so alone : (
It was heartening to meet Joe Hill* (or re-meet, as we had heard the Joan Baez song), through this "pie in the sky" phrase, just after asking ourselves (see last week's post) whether industrialization had dulled our senses, dulled our expectations. We won't venture a guess as to whether workers in control of the means of production would bake a better pie. We suspect that the problem of caring, the problem of investing oneself in the task at hand, whether baking a cherry pie or doing any other task, may well remain. How do we respond? The IWW emphasized the primacy of human life and happiness, and their mission was to respond consciously to industrialization. Jersey Pie is simpatico with this. We steadfastly assert that the cherry pie product should be of the highest quality, no matter who produces it, and we will continue to alert the public to purveyors of shoddy pies. Dining establishments, if the pie is not going to be good, do us all a favor and take it off the menu. This is our answer (for now) to our readers, who must by now be asking - as we are asking ourselves - why do we keep ordering cherry pie in New Jersey diners?

*Joe Hill, the most prolific songwriter of the Wobblies, coined the phrase "pie in the sky" in the early 1900s. Joe was stickin' it to the Salvation Army, suggesting that working folks needed pie here and now, not promises of heaven. Some folks will tell you that it was Joe's insistence on pie for the common man that got him shot full of holes by a firing squad in Utah. You see, Joe was in bed with another man's wife the night two thugs robbed and killed a merchant in the same town. When Joe turned up with a jealous man's bullet in him, the same night as the robbery took place, it looked suspicious. All the united workers of the world, and even President Wilson, couldn't save the 36 year old pie-idealist from the firing squad. His martyred body was taken to Chicago, IWW headquarters, and cremated. His ashes were mailed to IWW locals all over the world, and freed to the winds the following May 1st. Except for one envelope of ashes that was confiscated by the United States postal service and stamped "subversive." These ashes were released from the National Archive to the IWW in the 1980s, and in deference to Abbie Hoffman's prankish vision a portion of them were eaten by Billy Bragg. Jersey Pie's pie clamoring will hopefully not have such a dire outcome. Here's to you, Joe Hill. 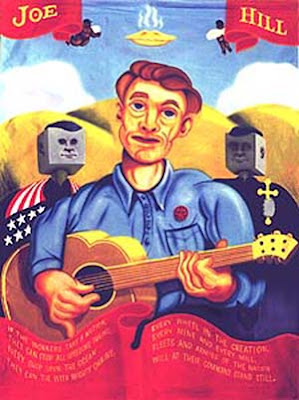 The Park Wood Diner gave us every reason to believe we would get good cherry pie. The chicken soup was good. The salad was fresh. Even the coleslaw was good. The place mats boasted "You'll like our food." A sign on the coffee maker said "God Bless America." We really believed it might happen. The slice we were served was fresh on both edges, which seemed to bode well. But that pie was nothing more than crust on the outside and red stuff on the inside.

It looked like a pie. Yeah, in a court of law it could be proved they had intended to make a cherry pie. They probably have a paper trail - invoices for cherries filed away, a testimonial from a 'baker' ( "I am the baker what make ze pie. Yes. I make ze crust. Also, I fill ze crust wit ze cherries. I swear I do zis.") - just in case in this litigious society someone asks for their day in court. The plaintiffs' discussion with counsel might go something like this:

Jersey Pie: We feel that by implication they were saying that there would be cherries in the pie.
Lawyer: So, are you saying it was a blueberry pie?
Jersey Pie: No, we mean the quality, a thing can't have no quality at all. Could they serve anything beige on the outside and red on the inside as cherry pie?
Lawyer: I think you've got no case, is what I think.

Trader Joe's cherry crumb pie last weekend was not much better. All real ingredients, no preservatives, a little more than 50% crumb. Something slimy happened between the cherries and the crumbs. And sweet. Not HFCS sweet, but sugar sweet. Not good. We are starting to think we can distinguish the flavor of disregard. This Trader Joe's pie carried the taste of the bottom line. And that brings us back to the assembly line. On television this week they're advertising the new Terminator movie. And here we pose a pie-quest inspired philosophical query: Have the machines already won? Is it not so much they might gain a survival instinct and human-like consciousness as they have already dulled our own awareness...of the quality that human care brings to a pie? Rather than rising to our level, have we already fallen to theirs, with questions like: how much filler can I use and still call it pie? How little effort can I apply and still keep my job? How little can I possibly care about what I am doing and still get it done?

It's a dark day for Jersey Pie. It's hard to believe we'll find any reason to carry on with our quest, and yet we continue our search. There are some lights on the horizon. We've heard of an orchard in South Jersey, where folks line up for pie. Seems positively Edenic. Is that what we're really looking for here? A sort of Platonic ideal to feed our souls as much as it stuffs our pie holes? What are we really looking for?
at 5:08 PM 6 comments:

362 Grand Avenue
Englewood, NJ 07631
Pie $3.75
Coffee $1.25
There is no reason to go to another eatery in New Jersey for pie if you can get yourself to Jackson Hole Burgers. (What were they thinking, naming an eating establishment Jackson Hole Burgers? The tiniest migration of syllable stress from bur- to hole brings up so many unfortunate ass-ociations!) But we should say, there is no reason to go to another eatery for pie, unless you want cherry pie. They don't make it. Their blueberry and apple pie are both homemade, and delicious. They serve it gently warmed, seemingly not in a microwave, and with a spritz of whipped cream and a drizzle of chocolate that made us wonder at first, but ended up being tasty. Jersey Pie was heard to exclaim with eyes opened wide, "This is so fucking good, why don't they make cherry pie?!" A follow up inquiry made at the cash register confirmed that apple and blueberry are the only fruit pies popular enough to merit home-making. Maybe we'll present them with the results of Jersey Pie's own survey: 3 out of 5 people surveyed prefer cherry pie! ; )

Jackson Hole is an immaculate 50's style boxcar diner, at least in architecture. So clean you could eat off the floor, as they say. The seats sparkle like starlight. The chrome fixtures gleam. The coffee's alright. Breakfast is always on the menu. They even have jukeboxes on every table. Not open 24 hours tho. And, as the name makes clear, the emphasis is on the burgers, 7oz's cooked on the grill right before your eyes. Vegetarians beware; they'll test your moxie. Check out the Jackson Hole menu, and post a comment letting us know whether you think it's a diner menu. New Jersey Diners.com loosely defines a diner as a place that serves coffee, has a counter, is open 24 hours with their entire menu available, has a neon sign, and has jukeboxes. Jackson Hole has most of this. But it's a chain. Being a chain puts it into the Denny's/IHOP category, according to Diners.com, where it doesn't seem to belong, either. Jersey Pie doesn't mind Jackson Hole's ambiguous detailia, but lacking cherry pie, we cannot end our quest here.
at 6:51 PM 3 comments: