We have heard that too much analysis of something good robs it of its sweetness. This will be short. And we shall whisper, in case that helps. Come close.

After finding the Moltisanti connection to the V.I.P. Diner, we dared to look into the location for the filming of perhaps the best five minutes in the history of television, the final scene of The Sopranos. You know, sometimes a t.v. final episode hits you like the loss of a loved one - MASH, the Carol Burnett show, Seinfeld. Anyway, we found the location, Holsten's, and not only was the place real (as opposed to a set) and local, but its menu listed Homemade Pies, not to mention Homemade Ice Cream and Homemade Candy. Something so special just had to be shared. We got in touch with M. on Facebook. She had just posted in her status that she was "compartmentalizing." We posted that we had something for the compartment we have come to call her pie-hole. We kept it a secret all the way to Holsten's.

David Chase, who grew up in Clifton and North Caldwell, may have had fond childhood memories of Holsten's. If so, we are left all a-wonder that when he scouted the location in February of 2007 he ordered onion rings. When Tony ordered them in the final scene he called them the "best in the state." That is probably not true. The onion rings are bought frozen, not homemade like the sweet things that Holsten's serves.

On that special day, everything unfolded like destiny. We picked up M. at the train station, easily found our way to Bloomfield, and (!) parallel parked right across the street from Holsten's. We were greeted at the door by the Easter Bunny. (We know, it sounds like Jersey Pie is hallucinating; that is how - hush now, whisper - special it was.) We opened the door to the smell of homemade chocolate.

Very little was changed for the Soprano's shoot, and we felt like we were walking right into that transfixing Sunday evening screen. But the little jukeboxes were props, and we happen to know that the Russian-mob-looking dude went into the Ladies Room.

It was wonderful to be there.

And although they did not have cherry pie, and never do, they did put maraschino cherries on our banana split and sundaes. The ice cream was freshly made. And we hope you have had, and will often have, something so truly good. [Cut to black.] 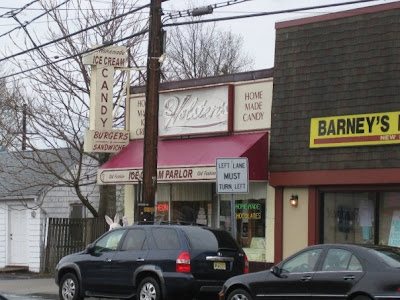 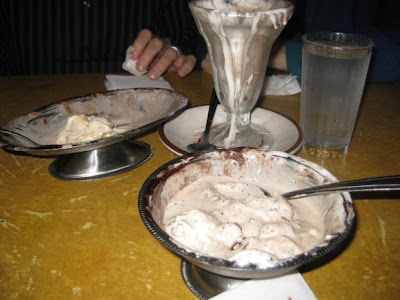 It was every bit as good as you describe. I also noticed that bathroom thing. And the fact that we didn't abruptly black out, mid-gluttony.

LOVE the Jersey Pie inspired painting! I want to eat it...

We love that your photo captures the bunny peeping over the black car. That's our favorite detail.

Any readers keeping up with the comments will enjoy that the painting immortalizes the pie crust recipe posted by Kate on Jersey Pie!

Aha - I looked at her website and saw that! Perhaps I WILL eat it...

Probably in July. Keep that bullwhip oiled, and your clupeepers peeled.